We're glimmer... like a little bit of hope shining in the dark.  A faint or distant light.  The smallness is important.  And the darkness around it is important… not Glitter or Razzle Dazzle or even Sparkle…just a little glimmer (of life?)… a tiny bit of showbiz, but small—like a puppet show lit by candles for close friends.

We are a folk-pop-a-roll band made up of theatre and music veterans — The Walkabouts, 1-Uppers, Sumac, Hedwig & The Angry Inch at the Moore Theatre, and much more. Our first album “Still Here” came out in January 2017 and we're set to finish recording our follow up album this Winter. 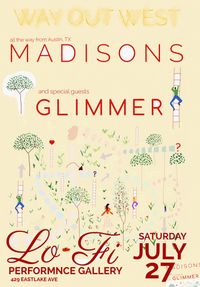 glimmer with the Madisons

We're excited to be playing a show in Seattle on Saturday, July 27th @ LoFi with an Austin, TX group called the Madisons 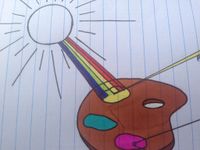 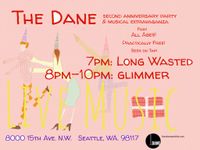 Glimmer is playing at 7pm sharp, followed by the Ottoman Bigwigs.

The Bigwigs are a special group that was headed by the inimitable actor and musician Chris Welch who passed away many years ago, but left an amazing body of work that is still being celebrated by those Chris left behind. The Bigwigs are original members James Palmer and Ron Carnell who will be joined by various singers.

Join us for dinner and/or drinks! glimmer plays three sets beginning at 9pm. No cover charge, kids are welcome!

glimmer with our friends long wasted

This is a free early show, with family-friendly music, food, beer, wine and alcohol-free beverages aplenty!

Benefit performance for the Valve Turners

An event to raise awareness and financial support for environmental direct-action activists known as the Valve Turners. Click on the below link to learn more about them.

And click on the below link to learn more about the event venue Duwamish Community Cohousing:

glimmer with our friends long wasted